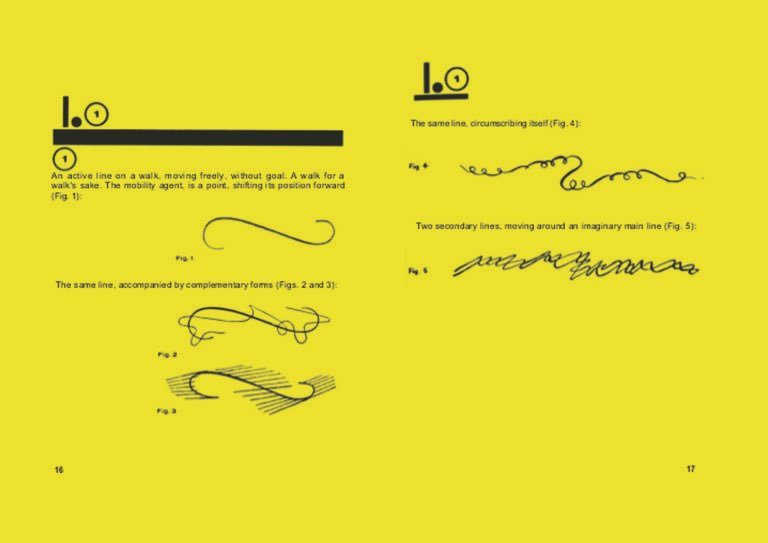 In a transtechnology research seminar, Professor Michael Punt asked, “Where does the line come from?” At the time I proceeded to write this down in my notebook but nothing else occurred from this noteworthy and curious question. No one attempted a response and the matter was swiftly overlooked. It was not until recently that I returned to this question; I decided on studying the work of Paul Klee and specifically his pedagogical sketchbook as a visual reference, the way in which he attempted to visually orchestrate his theoretical musings. The first such instance of this pictorial rendition was that of the origination of the line, a notion that was negligible in the current state of things, so much so that this very question was ignored in the aforementioned seminar. Perhaps the question itself is unremarkable, but the execution of such a question in its chosen form interests me, both the aesthetic and theoretical underpinnings that Klee favoured.

It is almost as if the pedagogical sketchbook is a field book documenting the inception of graphic forms, drawing upon Klee’s perceptual experiences and relationship with nature in order to fashion new symbols. The origins of graphic apparatus are disclosed, the line stemming from a single point, “shifting its position forward” (Klee, 1953), and take for instance the ‘formation of the black arrow’, which Klee explains with exactitude and authority: “the given white, much-too-much-seen and tiresome white, is noticed by the eye with little sensation; but the contrasting peculiarity of sudden action (black) sharpens the vividness of vision toward the climax or the termination of this action” (Klee, 1953). These sketches were produced in preparation for his lectures on visual form at Bauhaus Staatliche Art School; the version of pedagogical sketchbook circulating to this day has evaded the refinement likely associated with contemporary proponents of academia. Klee repeatedly transfers his thoughts onto the page in a rushed and coarse manner, yet there is something alluring about this on a contextual level that implies a seeming flow of contemplation.

Whilst viewing the illustrations that embellish the almost scientific procedure located in pedagogical sketchbook, I found similarities with Klee’s untangling of visual forms and Mark Forsyth’s ‘Etymologican’. In their respective processes they both extrapolate the origins of subjects that have become part of the putative orthodox of communication. This is possibly a narrow view, but based on the content alone, it makes perfect sense to decrypt the geneses of visual forms ‘visually’ and to decode the evolution of language by unravelling the words ‘textually’, or as Forsyth put it: “a circular stroll through the hidden connections of the English language” (Forsyth, 2011). Contrasting the smooth and glossy ‘Knowledge is Beautiful’ by David McCandles (discussed in earlier post), the pedagogical sketchbook absent of a gravitas in its application and for all its quirks manages to muster an emancipation of sorts. Klee’s sketchbook exudes a purity that McCandles’ creation omits; I personally felt that the arbitrary portrayal of knowledge in ‘knowledge is beautiful’ lacked a sense of purpose beyond the aesthetic whilst the pedagogical sketchbook is rife with a multifaceted vision.

FORSYTH, M (2011) The Etymologicon: A circular stroll through the hidden connections of the English language. London: Icon Books Ltd.